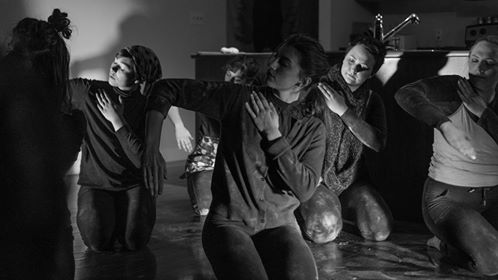 Every year QUSA funds a number of students for personal projects through our grants. Maya Cook '19 received a Student Arts Grant to to put on a traveling dance & show show last Spring. Read on to find out why she thinks performance is so important to our campus.

The student arts grant helped me to put on Wareniki, a 30-minute circus and dance performance that travelled around campus from the recplex to rooms in riverside. Wareniki is about making wareniki, a type of Mennonite cottage cheese pierogi, as well as how cooking can be the site of community and knowledge sharing, particularly in women’s spaces. I used the funds to buy a shadow screen for one of the acts and to buy flour to be used as a prop (covering the floor, carrying, and making dough for juggling).

Why is this project important for Quest?

Performance is a form of inquiry that exists alongside scholarly thought and as such it may help audience members (and performers) think through these important topics. Art is also fun and nourishing and I believe there needs to be more of it on campus!

As a narrative-based circus performance, Wareneki gives Quest students, faculty and staff access to a wider range of art on campus. Wareneki also deals with issues that many students are studying such as women’s spaces, capitalism, and colonialism. It also benefits the performers by giving students who are interested in dance, theatre, and circus an opportunity to practice their art form and push themselves as artists while attending Quest.

Why is this project important to you personally?

This performance is important to me for many reasons. For one, it has enabled me to form a circus arts community at Quest, which I didn’t have in the same way previously. It has enabled me to deeply explore questions of community, cooking, femininity, and immigration. It has given me the space and support to create and direct a show, something that I haven’t done at this scale before. It is also the first half of my keystone, the second half being a written critical inquiry.